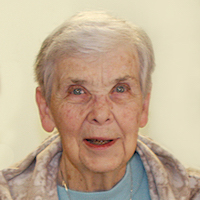 Kathleen, known as Miriam by most of us, was the Irish colleen among her four brothers. After graduating from Loretto Woodlawn, she entered the IBVM in 1948.

Miriam’s passion was education. She began as an elementary school teacher at St. Bride in Chicago and continued her studies to become an administrator and guidance counselor in both California and Arizona. Many of her 31 years “out west” were spent as Principal of St. Gregory School in Phoenix. She returned home to Chicago to care for her mother, but herheart remained in the southwest, and eventually drew her back to Phoenix.

Miriam was gracious and gentle, a beautiful person inside and out, which made her so lovedand appreciated. She had a quiet sense of humor and a strong belief in the importance of education. She was a great leader, collaborator and advocate who encouraged her students to achieve their goals. Along with her professionalism was her attitude of hospitality – welcomingall with a big smile

and a kind word. Miriam seemed to show that gentle quality of being “loving as a sister, courteous as a stranger.”

Although a very hard worker, and tireless in her ministry, she also knew how to have fun! She maintained a good balance between work and leisure, which is a wonderful skill and one of many we can learn from our beloved Sister Miriam.

—IBVM Sisters in Chicago and Phoenix