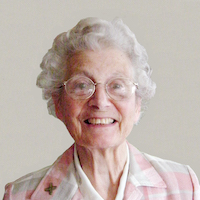 Sister Concepta ministered in Phoenix, Arizona from 1959 to 1963, when she was called back to Ireland to teach math and science in Navan, Ireland. In 1985 she returned to Arizona to teach at St. Simon and Jude School, and then Religious Education and RCIA at St. Gregory Parish.

Upon retirement, Concepta volunteered with the St. Vincent de Paul Society until she returned to Ireland in 2007. Concepta served the Phoenix Community for 22 years and has touched many with her teaching skills, but even more importantly, her love of God and God’s People.