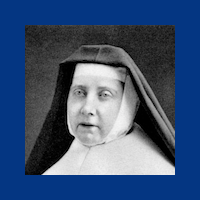 Below is the first of a three part story about the life of Reverend Mother Teresa Dease, who founded the North American Branch of the Institute of the Blessed Virgin Mary, the Loretto Sisters. She was a woman of faith, courage, and love – a true daughter of Mary Ward. I hope you enjoy her story.

Today, on the occasion of my sixtieth birthday, I feel called to look back over my life.  It certainly has taken some unexpected twists and turns over the years.  I was born on May 3, 1820, the eldest of five children.  My childhood years were good, and not unusual in any way but for the early death of my parents.  But in those years, even that was not very unusual.  In their stead, my grandmother provided for my every need.

When I grew to become a young woman, I was introduced to Dublin society, and began to participate in all of the responsibilities and pleasures of being a genteel woman.  I remember wondering why, when all of my friends seemed very happy in their role, and in being courted by eligible young men, that my life seemed, to me to  be empty, as if something were missing.  I thought back to the happy times while I was a student at Loreto in Rathfarnham.  The young sisters seemed to be so happy, although I do remember that they were always working or praying.  Something about that memory touched deep inside of me, and I asked myself if I could possibly be happy as a nun. After talking to my sisters and brothers, and to Mother Teresa Ball, who was the Superior at that time, I decided to enter the Loreto sisters.  I did find happiness in my roles as first a postulant, then a novice.

During that time, I knew that Mother Ball had been opening new foundations in faraway places, like India and Mauritius.  I had heard of India, it being a British colony.  But where in the world was Mauritius?  I fervently hoped that I would not have to leave Ireland, my country, my home.  But my wish was not to be.

I had been a Loreto for just under two years when Mother Ball came to me saying that I was being sent to a new foundation, across the sea in Canada.  There was a severe need for teachers in Toronto, and five of us were to leave in about a week’s time.  But first I must profess my vows, which I had been scheduled to do in just a few more months.

Usually professing vows is a solemn but happy occasion at Rathfarnham, celebrated by a special dinner and recreation.  But there was no time to prepare a celebration before we would leave. So I professed my vows the day before we would leave, on 8/4/1847, feeling in my heart the support of my sisters, and hearing it in their prayers.  At least I would be able to see my family one last time on that day.  I did not expect that I would ever return to Rathfarnham or to Ireland.

As the ship sailed, out of the harbor and into the sea, we all stood at the stern praying for a good journey and a successful start to our mission.  My companions shared my sorrow at leaving our homeland, but we knew that a new mission waited for us in the New World.  In fact, it had already begun.  We also shared a feeling of excitement and, dare I say it, a bit of pride for being chosen to begin a new mission in the New World.  Canada, here we come!